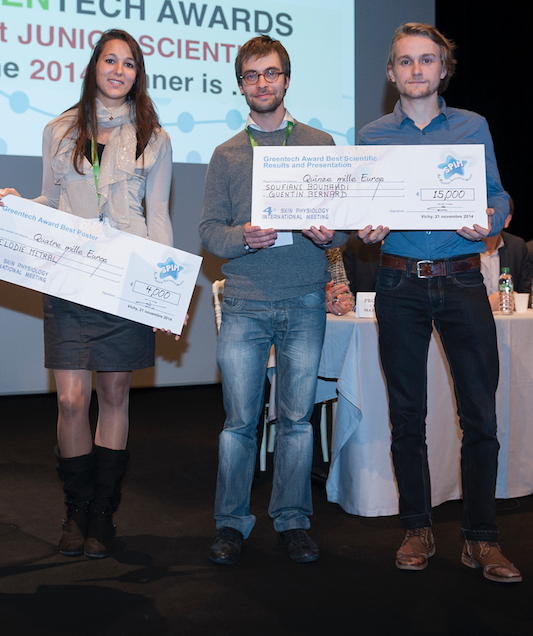 The Scientific Committee selected the “Best Junior Scientist 2014“ among the 9 young researchers (PhD or post-PhD) nominated and invited to present their results to Scientists and Industrials coming from the Dermatology and Cosmetic Worlds.
The Scientific Committee awarded 2 young and expert scientists for their outstanding works, Mr Quentin BERNARD (from the Institut de Bactériologie – Strasbourg – France) and Mr Soufiane BOUMAHDI (from the University Libre de Bruxelles – Belgium). They both shared the grant of €15,000.

His scientific project was:
Lyme Borreliosis: the skin TLR2/TLR3 crosstalk during the early transmission of Borrelia.
During the transmission of Borrelia, the causative agent of Lyme borreliosis, skin cells are injured by the tick hypostome and saliva. We then searched to determine if the inflammation associated with the tick induced injury could influence the skin cells inflammatory response induced by Borrelia.

Concerning the “Best SPIM Poster 2014”, Elodie METRAL’s poster was selected by all participants and received the grant of €4,000.
She is a PhD student working in the Laboratory of Skin Replacement (LSC) in Lyon and in the Laboratory of Nucleic Acids (LAN) at CEA Grenoble.

Her topic was:
“The regenerative and « anti-ageing » effect of adipose derived stem cells”.
By using an in vitro skin equivalent in which adipose derived stem cells (ASC) were incorporated in dermis, a regenerative and anti-ageing effect could be observed. Indeed, epidermis was thicker in skin containing ASC, and dermis richer. These results can be correlated to an “activating” effect on keratinocyte and fibroblast proliferation and a “slowing” effect of skin ageing.

The first day was enriched with numerous lectures from experts of skin physiology and young researchers participating in the Greentech Awards. To relax all participants after the last sessions, everybody enjoyed an exposition of Hervé Di Rosa.
Hervé Di Rosa is the figurehead of the French contemporary painting. International artist and protean, he inspired an entire generation of young artists. Since 1981, the work of Hervé Di Rosa has been the subject of more than 200 exhibitions all over the world.

Designer of the modest art, he founded in 2000, in Sète (France) the International Museum of Modest Arts (MIAM), where the artists, exhibiting their work, push their boundaries of Contemporay art.
The night program continued with a cocktail and gala dinner.