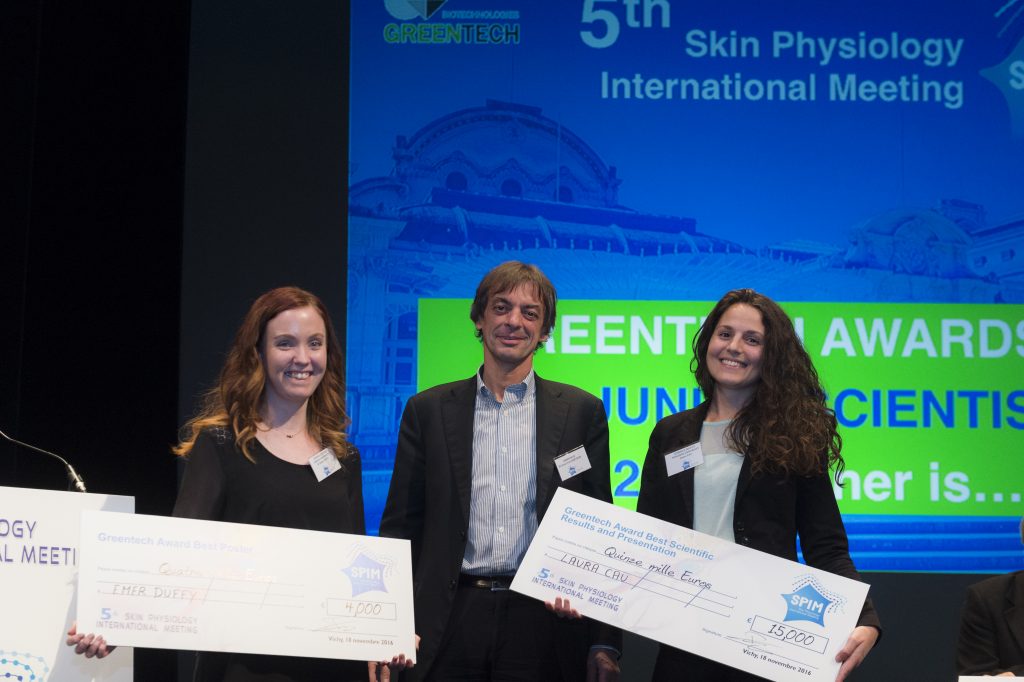 The Scientific Committee selected the “Best Junior Scientist 2016“ among the 9 young researchers (PhD or post-PhD) nominated and invited to present their results to Scientists and Industrials coming from the Dermatology and Cosmetic Worlds.

The Scientific Committee awarded a young and expert scientist for her outstanding work, Ms Laura CAU, PhD student working under the supervision of Michel SIMON and Marie-Claire MECHIN in the “Epithelial Differentiation and Rheumatoid Autoimmunity” Unit (UDEAR, UMR1056 INSERM, Toulouse, France). She received the grant of €15,000.

Her scientific project was :

Role of peptidylarginine deiminases in the regulation of filaggrin proteolysis.

The aim of the project was to determine whether the proteolysis of human filaggrin is controlled by the ambient humidity and to investigate the molecular mechanisms involved. For this purpose, in vitro reconstructed human epidermis maintained in either humid or dry conditions (relative humidity > 95%  or 30-50%) were compared. The results show that the proteolysis of human filaggrin is enhanced under dry conditions and that deimination, a post-translational modification catalyzed by peptidylarginine deiminases, plays a major role in this regulation.

Concerning the « Best SPIM Poster 2016 », Emer DUFFY’s poster was selected by all participants and received the grant of €4,000. She studied at the University of Tasmania in Australia and currently is a post-doctoral researcher at the Dublin City University.

A wearable concentration platform for sampling skin volatiles was presented. GC-MS analysis revealed the dysregulation of a number of compounds before and after acute barrier disruption, and discriminating volatile emissions were observed between the two groups.

A temporary tattoo sensor was developed for probing epidermal hydration through application of an AC signal. It was shown to characterise the hydration state of skin during forced hydration and tape stripping experiments, with validation against a commercial hydration meter.

At the end of the first day all participants after the last sessions were able to appreciate the exposition of Robert COMBAS.

Robert COMBAS is one of the most famous french artist. This artist was born in Lyon in 1957. His work has been approved as soon as he finished his studies at Les Beaux Arts de Montpellier. Then, he has quickly become the leader of the artistic movement « Figuration Libre ». This freedom appears in the numerous themes of his Art.